Focusing a little on the defense systems, we can easily speak about the new released Sukhoi Su-30, an aircraft produced by Russia at the company with the same name, also known as Flanker-C, an operating name given by NASA. Main objectives are the all weather and environment operations, so this can easily be called fighter.

This aircraft seems to be among the only combat mechanisms that gained the license from the Defense Ministry, along with some other ones such as Su-34, Su-35 and Su-27. The rest of the aircrafts produced by Sukhoi remained at the stage of prototype airplanes. 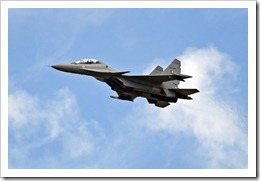 There were two released versions of the Su-30 (Su-30MK2 and Su-30MKK) and these were made by two different entities within the mother company, Sukhoi. Both versions were designed to be sold and operate in the major part of the Eastern Asia, especially in China, later on in Vietnam and Indonesia. The aircrafts followed the line of the Su-35, designed to carry only two persons and the Chinese demand for these was mainly focused on the attack and the load that an airplane could carry, rather than the tracking devices built into the navigation system, saying that this aircraft should be designed for fighting purposes and wanted to resemble the American F-15E. This type of airplane was mainly designed by KnAAPO.

On the other hand, the Su-27UB was mainly designed by Irkut and distributed in India. Beside this, the same company designed the Su-30MKV, MKA and MKM but they chose to improve the radar features such as thrust vectoring or canards, and were sold to Venezuela, Algeria etc. All aircraft models were produced by Russian Airforce and they are working on getting a new version out to market, the Su-30M2.

It is well known that the Su-30 series is a complete aircraft, two pilot’s compartment and a number of additional features. The most impressive aircraft remains the Su-30MK that combines all features specific to a combat airplane. It can operate on any fields of action, all weather types, air-to-air attacks and air to ground combats and not only, they can be used for patrol and escort purposes as well.

In terms of combat weapons, the Su-30MK excels through the 12 hard points for its weapon load, 2 situated on the edge of the wings, 3 underneath each wing and another two under the two wing engines and the Su-27PU, on the other hand has only 8 hard points. Nevertheless, both aircrafts can carry eight tons of ammunition.

The engines are Saturn AL-31F that release a force of 12.500 kgf and a speed of 1.350 kilometers per hour calculated at low altitude together with a 230 meters per second climbing rate.

The airplane can fly around 4 to 5 hours in mission, carrying a fuel load of 5270 kilograms, translated into almost 3000 kilometers. The crafts can be fueled while in motion and this can assure a prolonged time of action up to 3200 miles and around ten hours. The aircraft is extremely efficient in all circumstances, and can be used whether for patrol only or combats.