The French company Dassault Aviation manufactured a jet fighter aircraft of the 4.5th generation with twin engine and delta wings, serving multiple purposes. It was introduced in 2000 and it has been operating since both on land by French Air Force and on carrier by the French Navy. The model is still pending for orders to be exported to other countries. 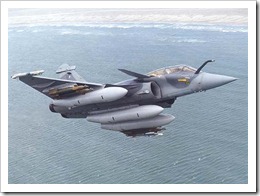 At the middle of the 1970s, the French Navy and Air Force were both requiring an improved fighter aircraft to replace the former Aéronavale F-8 Crusader and the AdlA SEPECAT Jaguars. Because both entities had similar requirements, they were merged into a single project. In 1983 Dassault was awarded the contract for two demonstrators, called Avion de Combat eXpérimental or ACX. Although at the beginning of 1980s several nations such as Germany, Italy, France, Spain, the UK, showed intention for building a common fighter, they disagreed upon technical and design details and finally split in 1985. The project was continued by France which produced the smaller model of Rafale. The other nations developed the Eurofighter Typhoon.

Because the crusader fighters F-8E that were going to be replaced for the Navy were quite old, the Rafales for the French Navy were a priority. Those fighters were embarked aboard Charles de Gaulle crusader in June 2004 after a long evaluation including flying limited tanker and escort missions in Afghanistan.

The first three fighters for the French Air Force were delivered in December 2004 and they were subdued to operational evaluation and a training for associated pilot conversion.