Mitsubishi ATD-X Shinshin represents the name for a fifth-generation jet fighter prototype, which is equipped with advanced stealth technology. The prototype is developed for research purposes by the Institute of Technical Research and Development belonging to the Ministry of Defense in Japan. Mitsubishi Heavy Industries is the project’s main contractor, which makes many say that the prototype represents the first stealth fighter domestically produced by Japan. ATD-X stands for “Advanced Technology Demonstrator – X”. The Japanese name of the aircraft means “one’s mind”. 2014 is the year when the fighter is scheduled to make its first flight. 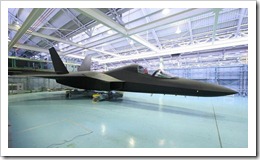 The purpose of this research prototype is to determine the viability of fifth generation aircraft domestically produced and whether a three times bigger aircraft can be fully produced in the future. An important feature of the aircraft is the capability of 3D thrust vectoring. There are 3 paddles which control thrust for the ATD-X. The paddles are placed on each nozzle of the engine. This system is similar to the one of the Rockwell X-31. For the production model on full scale there is another engine which is being developed with axis-symmetric thrust vectoring.

The fly-by-optics system for flight control is another important feature of the Mitsubishi ATD-X, which uses optical fibers instead of wires, thus allowing data transfer with higher speed and providing immunity to disturbances by electromagnetic waves.

The radar on the Mitsubishi ATD-X will be the active electronically scanned array one, or AESA, called ‘Multifunction RF Sensor’ with a broad spectrum agility, electronic support measures or ESM, electronic countermeasures capabilities, possibly microwave weapon functions and communications functions.

The aircraft will also be able to control the Self Repairing Flight mode, meaning it will automatically detect damage or failures while flying in its control surfaces and it will calibrate by using the control surfaces which remain, so to retain a controlled flight.