The American company McDonnell Douglas designed in 1980 a fighter for ground attack on all kinds of weather with the name F-15E Strike Eagle. The fighter doesn’t need electronic warfare aircraft or escort. The F-15 Strike Eagle proved its qualities in the Desert Storm Operation and the Allied Force Operation. It stroke high-value targets and carried out combat air patrols. It also supported the coalition troops. The new model of Eagle is different than the older U.S. ones by having conformal fuel tanks positioned along the intakes of the engine and also darker camouflage. 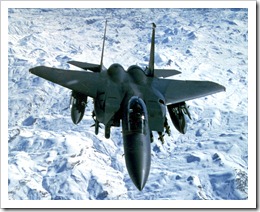 The new Eagles have a radical different mission than the previous F-15 models, being more adapted for air-to-ground missions. The F-15E, however, proves also lethal in air-to-air combats, not only in ground attacks, as a feature kept from the basic F-15 models. This way it can very well defend itself on air against enemy aircrafts.

After 2007, the F-15E was improved with Raytheon APG-82 AESA radar. Boeing received in 2010 the first test radar. It is a combination of the APG-79 from F/A-18E/F Super Hornet and the APG-63(V)3 AESA and adapted to the F-15C model. The upgrade of the radar is planned as component of the Radar Modernization Program for the F-15E. The designated name of the new radar is APG-82, after it was first called APG63(V)4.

The new model of F-15, the Strike Eagle is expected to last twice the time of its predecessors due to its sturdier airframe. The models are expected to be operating until 2025 and even more. There are plans for a Next-Generation Bomber based on the profile of the Eagle Strike. Future projects include the manufacturing of F-35 A Lightning II designed to replace various attack aircrafts like F-16 Fighting Falcon and the A-10 Thunderbolt II. It could also assume major part of the actual F-15Eagles role.