One of the highest performing Indian fighting airplanes, a product of the LCA program (Light Combat Aircraft) and, at the same time, as an answer to the need of replacing MIG 21 fighting airplanes which were rapidly becoming old, is the HAL Tejas multirole fighters. That are light weighted and their movement comes as a consequence of a single engine. Having no tail, but a delta wing design and configuration, the Tejas have only one vertical fin, to compensate for the lack of fore and tail planes. Relaxed static stability, multi-mode radar, fly-by-wire system for flight control, integrated digital avionics system and advanced digital cockpit are only part of the technologies one could find in a Tejas fighter. 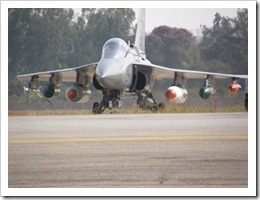 Owning a light weight structure, made of composite materials, it’s no surprise that the IAF and the Indian Navy ordered more from such airplanes, be it to increase stocks or to replace older versions of such fighting air vehicles, such as Harrier T60 or the Sea Harrier FRS51.

The technical performances of the Tejas are quite impressive, being the second supersonic fighting jet put together by the HAL (Hindustan Aeronautics LTD), the first being the Marut. Although it finds itself in production since 2011, operational clearance for the Air Force pilots will not be obtained sooner than 2014. The target of the work started in 2011 is to obtain a full squadron which will be included in the Flying Daggers squadron (the 45th). It will be based in Sulur at a certain moment, but until then Bangalore will be the air base for this fighters.

The Tejas were named like this by Atal Bihari Vajpayee, the Prime Minister and their name means “Radiance”. There are two military airplane operators in India: the Indian Air Force and the Indian Navy. The latter has already a requirement of 50 HAL Tejas.