People’s Republic of China has produced through the Chengdu Aircraft Industry Corporation a fighter aircraft to serve multiple roles called Chengdu J-10. The West calls it the “Vigorous Dragon” due to its high capability of undergoing operations in all-weather conditions. 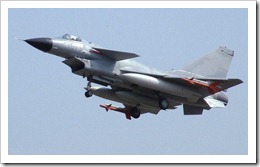 The single engine powering the J-10 aircraft is a Lyulka-Saturn AL-31F made in Russia, which gives a maximum of 11,700 kgf static power output. This engine is based on a similar model, the AL-31F, designed for air crafts with twin engines like Su-27. Because the J-10 fighter is smaller than a Su-27, some parts of the AL-31F engine have been redesigned and moved so to fit the smaller aircraft.

The internal armament of the Chengdu J-10 fighter aircraft is represented by a twin-barrel cannon of 23 mm, placed underneath the intake’s port side. The other pieces of equipment and weaponry are externally mounted on 11 hard points. To these several auxiliary pieces can be attached, consisting of bombs and missiles, equipment or fuel containing drop-tanks, weighing in total 6,000 kg (13,228 pounds).

The officials of the Chengdu Aircraft Industry Corporation claim that the J-10 aircraft radar designed in China with multiple mode fire control. The radar works with an antenna which mechanically scans the planner array and can track even 10 targets at a time. 2 of the 10 tracked targets can be simultaneously engaged with radar homing missiles which are semi-active, while active radar homing missiles engage other 4 of the 10 tracked targets.

The Chengdu J-10A is the multi role variant with only one seat. It is designated for export under the name of F-10A.

The J-10A has a twin seat variant of fighter-trainer called J-10S. The aircraft’s forward fuselage is stretched so to make room for another pilot seat, so that two pilots can sit in tandem. The canopy is a single large one, bubble shaped. Thedorsal spine is alos enlarged so that it can accommodate additional fuel or avionics equipment. Besides its training purpose, the J-10S aircraft can also be engaged in ground attack. The operator of the weapon systems is the pilot sitting in the rear seat.

The J-10A aircraft has also a naval version called the J-10AH.