China has developed its own twin-engine fighter aircraft of the fifth generation, named Chengdu J-20. Speed tests for the J-20 fighter were developed in late 2010 and in January 2011 the aircraft flew for the first time. 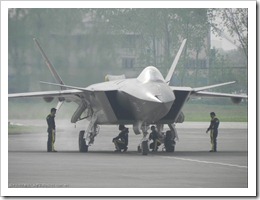 The J-20 project is part of a stealth fighter program codenamed J-XX dating back to the second half of the 1990s. It was first called “Project 718” and the PLAAF chose it for development in 2008 following a competition in which the J-20 proposal was chosen over a Shenyang proposal, an even larger fighter than Chengdu J-20 was. By the end of 2010 two prototypes have already been built.

Towards the end of 2010, the J-20 fighter made some tests of high speed taxiing, without actually flying, somewhere outside the Aircraft Design Institute where it was developed. The first flight of the J-20 aircraft was made in January 2011 and lasted for 15 minutes.

For the first flight of the J-20 in January 2011, the chase aircraft was a Chengdu J-10S fighter. The successful flight was followed by a ceremony which was attended by the chief designer, Yang Wei, the pilot who tested the J-20, Li Gang and the General Armaments Department Science and Technology Commission Director, General Li Andong, who is also the General Armaments Department Deputy-Director. In November 2011 the J-20 fighter made more flight tests.

After the U.S. and Russia, China made its way in top 3 world nations who developed and tested in flight combat aircraft demonstrators of full-size stealth.

The Chengdu J-20 fighter is a twin-engine and single-seat aircraft which can be compared to the Lockheed Martin F-22 Raptor and the Sukhoi T-50, only larger and heavier. The length is approximately of 23 meters or 75 feet and the wingspan is about 14 meters or 45 feet. The take off weight is approximated between 75,000 and 80,000 pounds or 34,000 and 36,000 kg taking into account only the internal stores.

The twin engines to power the J-20 fighter aircraft are thought to be Saturn 117S models of 15,000 kg or 32,000 pounds which are manufactured in Russia. This could signal some problems in the aircraft’s development according to the opinion of Col. David Lapan, the Pentagon’s spokesman. Chinese representatives, on the other hand, have claimed that the twin engine for the production aircraft is going to be a high thrust turbofan WS-10 class of 13,200 kilograms or 29,000 pounds which has Thrust Vector Controlled nozzles. Both these pieces of equipment are made in China.