Three companies in the aeronautic industry joined to build a special aircraft. The companies are BAE Systems, Alenia Aeronautica and EADS and the aircraft was named Eurofighter Typhoon. It is a multirole aircraft with a twin engine and canard-delta wing. The main customer of the aircraft is a NATO Agency. 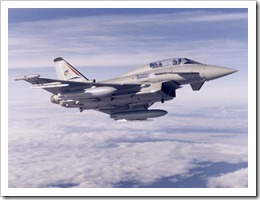 The aircraft is still in the production process and its procurement was signed under three contracts, or tranches. The Eurofighter Typhoon is being used by the German Luftwaffe, the British Royal Air Force, the Spanish Air Force, the Italian Air Force and Austrian Air Force. 72 such aircrafts were purchased by Saudi Arabia for 4.43 billion Pounds.

Each company involved in the production of the Eurofighter Typhoon assembles its own aircraft suited for each national specific and interests and there are four different assembly lines. However, same parts are built for all the aircrafts. For Saudi Arabia order there will be a fifth line established.

There are two variants of the aircraft: twin-seat and single seat. The twin-seat model is only used for training.

The Eurofighter Typhoon can reach supersonic speed without the necessity of afterburners. The Austria and Germany announce on their Eurofighter websites that it can reach a speed of Mach 1.2 to Mach 1.5 without reheat. This no reheat supersonic cruise is called supercruise and can only be achieved if the Eurofighter has no external fuel tanks or missiles.

The Eurofighter is supposed to have faster acceleration at the speed of Mach 0.9 at an altitude of 20 000 feet, compared to other aircrafts, such as F-15 Eagle, Sukhoi Su-27, F-14 Tomcat, Mikoyan MiG-29.

A Eurofighter T1 used for training was reported to have had in 2005 an encounter with two American aircrafts, Air Force F-15E models. The encounter happened in Northern England, over Lake District. It ultimately turned into a mock dogfight and the Eurofighter emerged victorious.