The Sukhoi OKB Company developed for the Air Force of Russia a jet fighter of the fifth generation called the PAK FA. 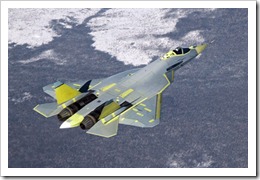 T-50 is the present prototype of the Sukhoi. After being fully developed, the PAK FA is meant to replace the Su-27 and the MiG-29 models. Through its design and equipment, it is the main competitor of the F-35 Lightning II and the F-22 Raptor developed by Lockheed Martin. In January 2010 T-50 had its first flight and the second one was operated in February 2010, followed by a third one a week later. Up to present it operated a total of 17 flights.

The project has evaluated a market of 1000 aircrafts for the next 40 years. The production of the fighters is a joint project with India, which, together with Russia, will benefit of 200 aircrafts each. The other models produced are intended for export to other countries. The director of the Sukhoi Company has stated that the collaboration with India will be expressed in joint work rather than joint venture.

India will acquire 50 fighters with single seat of the variants for Russia, to start with, followed by FGFA model with two seats, when it is developed.

Russia intends to purchase ten aircraft at first, after 2012 and after 2016 – 60 more. The first fighters are going to be delivered without the engines of the fifth generation.

The new PAK-FA’s are expected to last in service for approximately 30 to 35 years.

Russian Air Force benefit now from the new jet fighter the Sukhoi OKB developed. The fighter is called Sukhoi PAK FA and is propelled by a twin-engine. The PAK FA model was developed from the Sukhoi T-50 prototype and is among the very few jets of the stealth jet programs all over the world.

When the work at the PAK FA jet model is done, it will succeed the Su-27 and MiG- 29 models of the Russian aviation army. Furthermore, starting from this particular jet, the Sukhoi/HAL FGFA will be developed in partnership with India. On the 29th of January 2010 the first flight of T-50 was performed followed by a second flight on February the 6th and a third one 6 days later. By the end of August 2010, the T-50 had already made 17 flights and reached a total of 40 flights by mid-November. At the end of 2010 a second prototype was scheduled to start the flight tests, but they actually took place in March 2011.

For the next 40 years, Mikhail Pogosyan, the Sukhoi director, has planned to market 1000 air crafts. These air crafts are going to be produced with India, as part of a joint venture. Russia and India will benefit of 200 air crafts each, while the rest of 600 are meant for other countries. The collaboration with India is seen more as a joint work following the current agreement and not exactly a joint venture. 50 single-seater fighters designed for Russia will be acquired by the Indian Air Force, preceding the FGFA two seat model. After the year 2012 Russia will purchase 10 air crafts, while another 60 will be purchased after 2016. It is previewed that the second customer to buy this type of air crafts is going to be Vietnam. The service life of the The PAK-FA is previewed for 30 to 35 years.

In 2011, at the MAKS Airshow, the public could see for the first time the new T-50. Vladimir Putin, the Russian prime minister, attended this airshow. In June 2011 the flight of the Sukhoi PAK FA was publicly shown in a video containing several acrobatic moves. The 100 flight of the PAK FA was achieved in November 2011.

T-50-3 was the third prototype of the program and was scheduled to fly using an AESA radar sometime before the end of the year 2011. This third prototype flew for the first time in November 2011 in Komsomolsk-on-Amur. Sergey Bogdan is the name of the pilot and he took off from the KnAAPO’s airfield. The T-50-3 flew for more than an hour while power plant and basic stability checks were performed.

The maximum weapons load which was reported for the PAK FA is 7,500 kg. One of the weapons will be a cannon, probably a Gsh-301. It is designed to carry even a pair of 30 mm cannons. It also has two internal bays of 4.6-4.7 by 1-1.1 meters. There are speculations about the existence of two other internal bays of short range use and 6 external hard points.